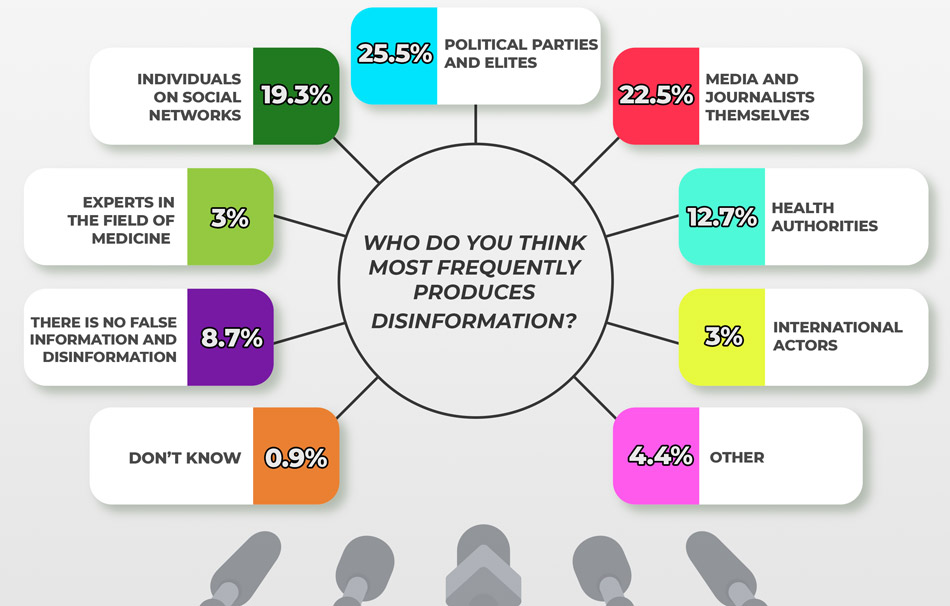 Survey: What do citizens think of media reporting during the COVID-19 pandemic

Macedonian Institute for Media in cooperation with M-Prospect agency conducted a survey of citizens’ views regarding media reporting during the COVID-19 pandemic. The telephone survey was conducted 14-20 December 2020, at a random sample of 1003 respondents.

The respondents were asked how much they agreed with the statement that media have been reporting professionally and impartially during the COVID-19 pandemic. According to their responses, every fourth respondent (25%) completely agrees with this statement, 39 % somewhat agree, 21.8% somewhat disagree, whereas 13.6% completely disagree. Considered cumulatively, the percentage of those who consider that the reporting has been professional and impartial is 64.1% and is larger than the percentage of those who disagree, which stands at 35.4%.

Analysis of the responses shows that the agreement with the statement for professional and impartial reporting increases with age. Thus, 19% of the 18-29 age group completely agree with the statement that media have been reporting professionally and impartially during the COVID-19 pandemic, the percentage with the 30-64 age group is 22%-23%, whereas with the age group above 65, the percentage is higher and stands at 36%. Nearly every third ethnic Macedonian, or 29.4%, completely agrees with this statement, in comparison to 13.3% of the surveyed ethnic Albanians.

False, unchecked information and disinformation is what the majority of respondents (39.7%) object to in the way how journalists report.  15.3% of the respondents said media bias towards certain political centres of power bothered them, 13.5% have a problem with discrimination of certain groups in society and hate speech, 12% pointed that sensationalism in reporting bothered them, 8.3% said it was disrespect of privacy and 9.6% said had no complaints for journalistic reporting.

Looked through the prism of ethnicity, the results differ with ethnic Macedonians and Albanians – sensationalism, discrimination of certain societal groups and disrespect of privacy in reporting was more frequently mentioned by the ethnic Albanians, whereas the ethnic Macedonians objected more to the reporting of false, unchecked information and disinformation, as well as the bias towards the political centres of power.

Regarding themes for which the respondents spotted false information and disinformation, largest percentage (22.7%) point to themes about number of people infected with coronavirus, then vaccine safety (13.7%), treatment of the virus infection (12.1%), origin of the virus (11.3%), availability of tests (11.2%), religious festivities of Ramadan Bayram and Easter (8.8%), as well as the parliamentary elections and the pandemic (4.7%), the beginning of the school year during the crisis (2.7%). The percentage of those that hadn’t spotted disinformation and false information is 8.4%.

Regarding the issue of who produces disinformation and misinformation, every fourth respondent said the political parties and elites did (25.5%), more than a fifth (22.5%) said the journalists and media themselves, 19.3% said individuals on social networks, 12.7% said the health authorities. Experts from the field of medicine and international actors were pointed by 3% of the respondents.

Ethnic Albanians to a greater degree more than ethnic Macedonians consider that health authorities themselves cause disinformation (26.2% in comparison to 8%).

When asked which sources of information respondents trust most during the COVID-19 pandemic, domestic TV channels (50.5%) are the most frequent choice and nearly one quarter (23.8%) trust most foreign TV channels. The percentage of those who trust the information received from social media friendships is 7.8%. Information published by the internet portals was trusted by 5% of the respondents and 4.1% trusted printed media. However, this data should be considered into the context of general decrease in newspapers readership and growing migration, especially of the younger audiences, online. Trust in domestic TV channels grows with age, especially with those above 50, whereas trust in internet portals and information received via social media friendships is highest with the 18-49 age group and afterwards decreases.

The survey was conducted within the project News and Digital Literacy Project – Where Fake News Fails, implemented by the Macedonian Institute for Media, the Institute for Communication Studies, the Independent Trade Union of Journalists and Media Workers, and the Media Diversity Institute from London, funded by the European Union.

The findings in this survey are the sole responsibility of the surveying agency and the purchaser of the service and should not be considered to reflect the views of the European Union.