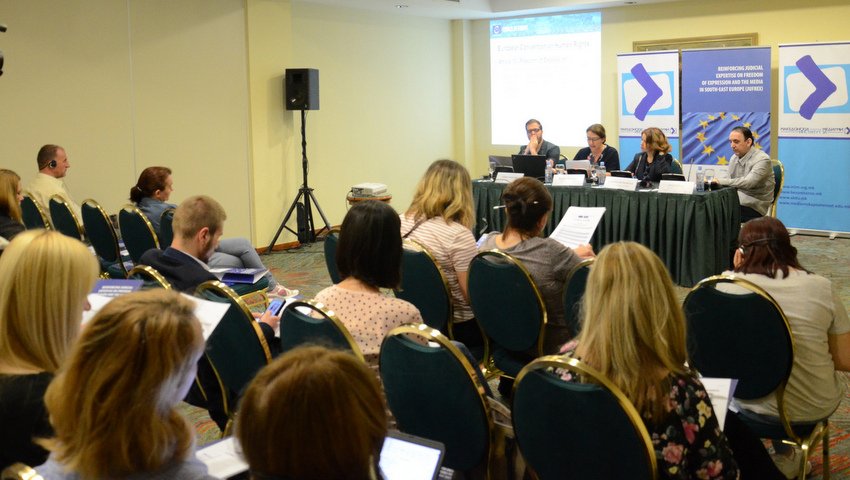 Encouraging critical thinking and media literacy among social networks users, raising the political culture of communication, effective and independent self-regulation online and consistent implementation of the laws are some of the proposals regarding solving the problems of communication in the internet space which were raised at the conference "Rights and obligations in communicating on the Internet". The event was organized by MIM in the frames of the joint project of the European Union and the Council of Europe, titled "Strengthening the Judicial Expertise for Freedom of Expression and Media in Southeast Europe (JUFREX)".

The social networks become a new type of public with their own positive and negative sides, but the human factor is crucial in this communication, said Sead Dzigal, an expert on media literacy and social media. "The problem is that users of social networks have unlimited rights, but not obligations, especially in the local context where the legislation either is not applied or is applied selectively and insufficiently," he says. According to him, the communication, media and political culture in the society should be improved and the solutions to the problems should be seeked in the education, that is, the inclusion of these topics in the formal and the informal education, but also in the ethical leadership, which implies the empowerment of influential individuals and public figures as examples of responsible behavior for younger generations.

Nadia Bellardi, an independent expert, presented the standards of the Council of Europe and the European Convention on Human Rights and Freedoms, concerning freedom of expression, respect for private and family life and the privacy of information, stressing the importance of maintaining a balance between them. She referred to some of the more relevant recommendations of the Committee of Ministers regarding the presentation of violence in the electronic media, the new meaning of the media, protection of human rights in relation to social networks, the freedom of the Internet, as well as the media pluralism and transparency of media ownership, with an emphasis on the impact of online platforms.

According to Bellardi, disinformation and hate speech generate users as much as news or high-quality content, the propaganda expands faster and makes more damage then before, laws regulating hate speech can be easily misused and restrict freedom of speech, while media organizations can not do enough to protect journalists from hate speech. Some of the remedies for these problems, Bellardi sees in encouraging critical thinking and information literacy, identifying reliable sources, differentiating promotional content from facts, implementing high ethical standards in journalism, and effective and independent self-regulation of social media.

Journalist and civil activist Ognen Janeski, who noted that he himself was often the target of hate speech and insults on the Internet, believes that the laws do not protect users of social networks in reality. According to him, the existence of obligations and rights does not mean that everyone applies them. The idea of ​​self-regulation is good, he says, but creative ways should be found to work on improving the literacy of social network users, especially young people and those who spread hate speech. "Facts, verified information, statistics, links, counterarguments that break down their arguments and always behaiving in cultural and polite manner " is the way he recommends dealing with those who act unappropriately online or on the air.

A joint conclusion from the conference was that the hate speech should be an issue for open debate in order this phenomenon and the consequences of it to be demystified. Users of social networks need to react more often to the self-regulatory body and to the competent institutions, in order to make the problem more visible and encourage them to process cases. On the other hand, the problem can be effectively addressed only through the involvement of the institutions, that is, the civil sector, the regulatory body, the judiciary and the institutions that have the authority to deal with the problems on the Internet.