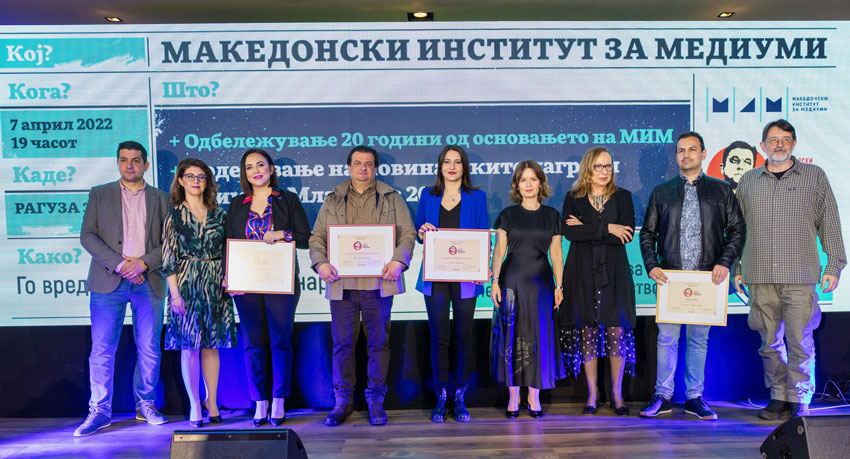 Presentation of the Nikola Mladenov Journalism Awards for 2021

Journalist Irena Karevska won the award for Best Investigative Story at this year’s competition for the Nikola Mladenov journalism awards for 2021, for investigating the case of procurement of software for automatic issuing of traffic fines, which was procured by the former government Secretary General Dragi Rashkovski. The story was published in the 360 Degrees programme, on Alsat – M television.

In a series of 10 news stories prepared in a modern television product, the author crafts her way in leading the reader through the investigation process in which she continuously publishes new, scandalous information, demonstrating detailed journalistic investigation, supported with facts, evidence and statements from relevant sources and interlocutors. Thus, she uses simple, intelligible and original expressions, but also demonstrates boldness, decisiveness and persistence in the intention for the case to be processed institutionally, which is an important criterion in assessing the quality of the stories.

Certificate of Appreciation for outstanding journalistic engagement in the category Best Investigative Story was awarded to the journalist Vlatko Stojanovski for the series of texts on the topic “Offshore Companies”, published on the internet platform SCOOP Macedonia.

Within the series of three investigative stories, the author demonstrated detailed journalistic investigation, crafting the processing, categorisation, and analysis of all the legal subjects which, within their ownership structure have other companies registered in the so-called offshore zones, and it also reveals information for people related to them, or are behind the companies, for their actions and activities.

Journalist Katerina Topalova was presented with the award for Most Innovative Journalistic Product for the multimedia story “From a Party Cash Cow to a Golden Chicken”, published on the internet platform Just Ask.

Through this short, dynamic and creative journalistic story, the author in an original manner succeeds to present and address to the public, the problem with the million-worth sums which the state-owned company ESM regularly spends for renting mechanisation for digging coal and tailings pond. The innovative and creative approach in this journalistic analysis and mini-research of a theme which is of high public interest lies in the fact that it is told on a Green screen by using graphics and 3D animation.

The best photo-journalism award was presented to the photo-reporter Igor Banskoliev for the photo “The Hero from Deljadrovce,” published in the Nova Makedonija daily.

The photo captures a moment of fighting with the raging fires near the Skopje village of Deljadrovce, during the fires last year.

The “hero” on this photo, with a bucket of water, half-naked makes his way through the smoke, trying to extinguish the fire on the railway near Deljadrovce. The author Banskoliev through this photo, in a most picturesque manner presents the individual fighting with the raging fires, demonstrating creativity, extraordinary aesthetic expression and sense of composition.

29 stories, processed within 88 texts and video stories, in the Best Investigative Story category;

13 stories in the Most Innovative Journalistic Product category;

The awards for best investigative journalist stories have been awarded by the MIM traditionally since 2001. The award was named “Nikola Mladenov” in 2013, after the renowned journalist and owner of the Fokus weekly.

Photo gallery from the event is available here.