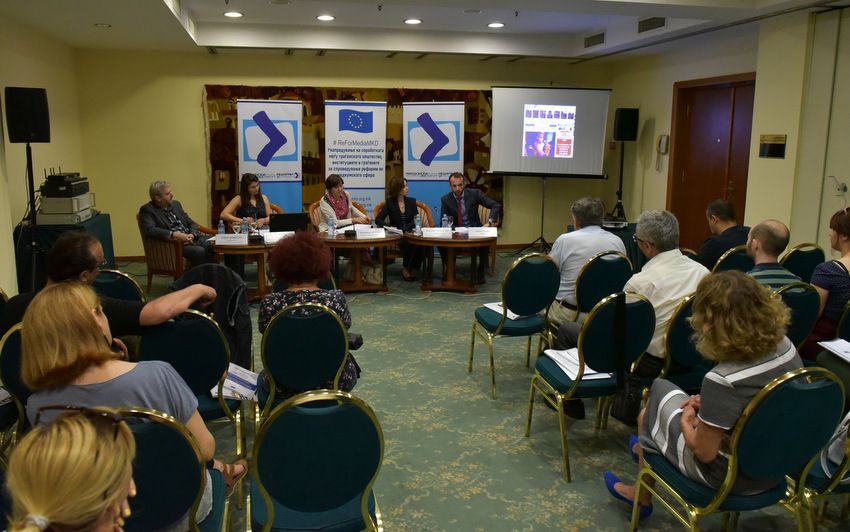 Hate speech should be suppressed with more speech deeming it unacceptable

Legislative amendments of the existing regulations aimed at more precisely defining hate speech, developing a consistent system for prevention and repression of acts of hate speech, including the application of the practices of the European Court of Human Rights by the judicial authorities, as well as ensuring urgent changes in the media regulations by introducing sanctions for hate speech and the inciting of violence through the audiovisual programs that the regulator would process in a misdemeanor procedure, are only part of the recommendations from the analysis of the MIM “The effectiveness of the legislation for protection against hate speech” by the author Nenad Zivanovski.

The analysis was presented on the debate “How to effectively deal with hate speech”, where representatives of the civil society from Macedonia and Slovenia, as well as representatives from the lawyer's guild, took part with their speeches.

The Attorney at Law, Lazar Sandev, believes that the Public Prosecutor's Office is inactive and does not raise initiatives aimed at protecting the public interest, in cases where hate speech is used. He underlined that journalists and politicians spread hate speech, and warned that this would continue to happen until the public prosecution begins to take appropriate steps. Sandev supports the idea of ​​changing the domestic legislation and advised to use the practice that emanates from the European Court of Human Rights, since there is no judicial practice in this area in Macedonia.

Elena Brmbeska from the Helsinki Committee for Human Rights emphasized that, according to their experience, ethnic, political and sexual orientation, as well as gender identity are the dominant foundations for outbursts of hate speech. “The Helsinki Committee regularly addresses the Public Prosecutor's Office, but the results are disappointing. In 2016, there was not a single case, and currently there is only one case in the Basic Court, which is still pending the final ruling ... “, explains Brmbeska. She stressed that they face serious problems when scheduling meetings with the Public Prosecutor's Office and suspects that they either do not recognize hate speech or they do not recognize where freedom of expression ends, and hate speech begins.

Brankica Petković from the Ljubljana Peace Institute noted that the legislation in Slovenia was more restrictive than the Constitution itself, and that the Public Prosecutor's Office was also not very proactive, although it processed more cases than in Macedonia. However, she said that it was necessary to change the awareness, and at the same time, the civil society should proactively demonstrate that no attack would go unpunished. “Still, there must be a symbiosis with the media. We should oppose hate speech with more speech deeming it unacceptable,” concluded Petković .

The debate was organized as part of the project “#ReForMediaMKD - Civil society, institutions and citizens - together in enhancing media reforms”, implemented by MIM in cooperation with the Peace Institute from Ljubljana, Slovenia, with the financial support of the European Union .

The full report of the analysis is hereby enclosed.

The photo gallery of the event is available here.

The effectiveness of the legislation for protection against hate speech3.42 MB